AFTER working with aquatic animals for 40 years, Spencer Pickering knows
loads about seals. He started his long and happy career at the oceanarium at Tweed Heads at the
age of 11 but he has seen few years to match this one.
It has been a bumper breeding year at the Pet Porpoise Pool, with the birth
of two seal pups within a month of each other.
Last week a new male seal pup made his debut, taking the Australian sea lion
population at the Porpoise Pool to 11 in total, and it is now at its maximum
capacity, but out of those only three are breeding males.
So far, all the seals that have been born at the Porpoise Pool are still
resident there and an important part of the breeding program is the monitoring
of the bloodline.
“This year has been a good year for seal pups,” Mr Pickering said.
“Now it will be another 18 months to two years before the next pup will be
born here.”
Sea lions live for about 25 years and the Porpoise Pool’s oldest seals, Nikki
(female), Hercules and Solomon, are now 21, 20 and 18 years respectively.
Nikki’s claim to fame is that she is the oldest living captive-born female in
the world. Two of the first seals at the pool were Sunny and Frisco, who both
died at age 23.
Tasco, a male who was born three years ago, may be swapped at some stage in
the future for another male to introduce new blood into the breeding stock.
The female seal pup, April, born a month ago, will probably stay in Coffs
Harbour unless another oceanarium wants a female breeder for new bloodlines.
The breeding program makes seals available to other oceanariums and zoos
throughout the world, though the Coffs Harbour Porpoise Pool prefers to send
their seals within Australia because the standards and regulations overseas are
not always up to scratch.
“Sometimes conditions are sub-standard or the trainers might not handle the
animals properly,” Mr Pickering said.
Oceanariums and zoos in Australia are strictly monitored and there are
controls in place for transferring animals.
The Pet Porpoise Pool goes through about 120kg of fish per day to feed the
seals.
An adult female consumes 4.5kg while a male eats 9kg. An adult male
Australian sea lion can weigh up to 300kg, but at the moment the males at the
Porpoise Pool weigh around 220kg.

Sandy drops in for a little R&R at Porpoise Pool 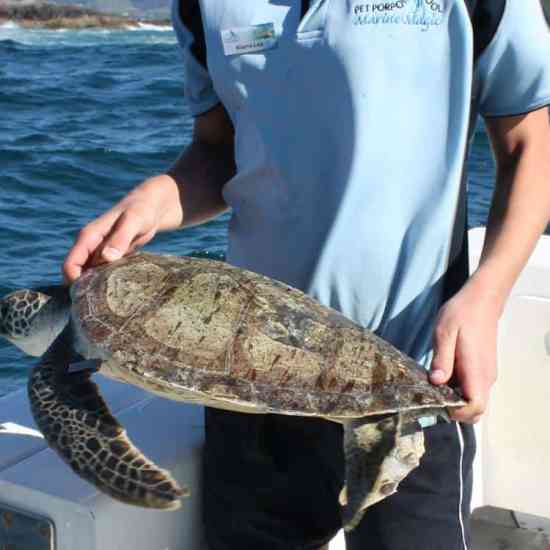